For the longest time, it seemed to me like there were two different motorcycle communities – those who ride a Harley Davidson, and those who don’t. The non-Harley riders were the real bikers – the ones who get it, and are into it to enjoy the ride. This included sport bike riders banging apexes on the track, adventure bike riders who travel the world on two wheels, and sport tourers who rack up an insanely high number of miles in an insanely short amount of time without ever getting off their bikes. It also included people like me, with an ancient UJM I picked up for a few hundred bucks, tinkered on, and enjoyed. We were the bikers who get it.

The Harley riders, meanwhile, were in it for the image, not the experience. It was middle aged men and women getting a midlife crisis cruiser so they could feel young and badass again. They’d buy anything they could get with a Harley logo on it, which is practically anything at all. They were the ones who pulled over at state lines between helmet law and no helmet law states to put on or remove their helmets as required. They wouldn’t wave at anyone wearing a helmet, or anyone who wasn’t riding a Harley. They weren’t real bikers. They didn’t get it.

When I decided to take myself someplace warm and ride a motorcycle for a couple of days one January, I was surprised to find that the least expensive rentals from EagleRider were Harleys. I didn’t expect that, since they’re so expensive compared to many other models, and especially the cheap old bikes I’m used to. So I figured why not see how the other half lives, and rented this Street Glide for two days. I proceeded to put over 500 miles on it. You can read about that trip here.

It wasn’t the bone shaking, oil spewing, terrible ride that the stereotypes had prepared me for. Sure, it loped and shook at idle, but it was designed to, because it’s a Harley. Once we actually got underway, it smoothed out instantly and was quite comfortable. It steered like a cow, but cruisers in general aren’t designed for corner carving, whether they’re Harleys, Indians, or Suzukis. In fact, the Street Glide turned out to be an excellent choice for the relaxed type of riding I was doing.

I started to meet more and more Harley riders who weren’t the stereotypical Harley riders I described above, but actual bikers who actually get it. They choose to ride Harleys instead of Hondas, but they respect the Hondas and BMWs and Triumphs. If you’re nice to me, I’ll be nice to you, and here were these Harley riders being nice to me, so cool. 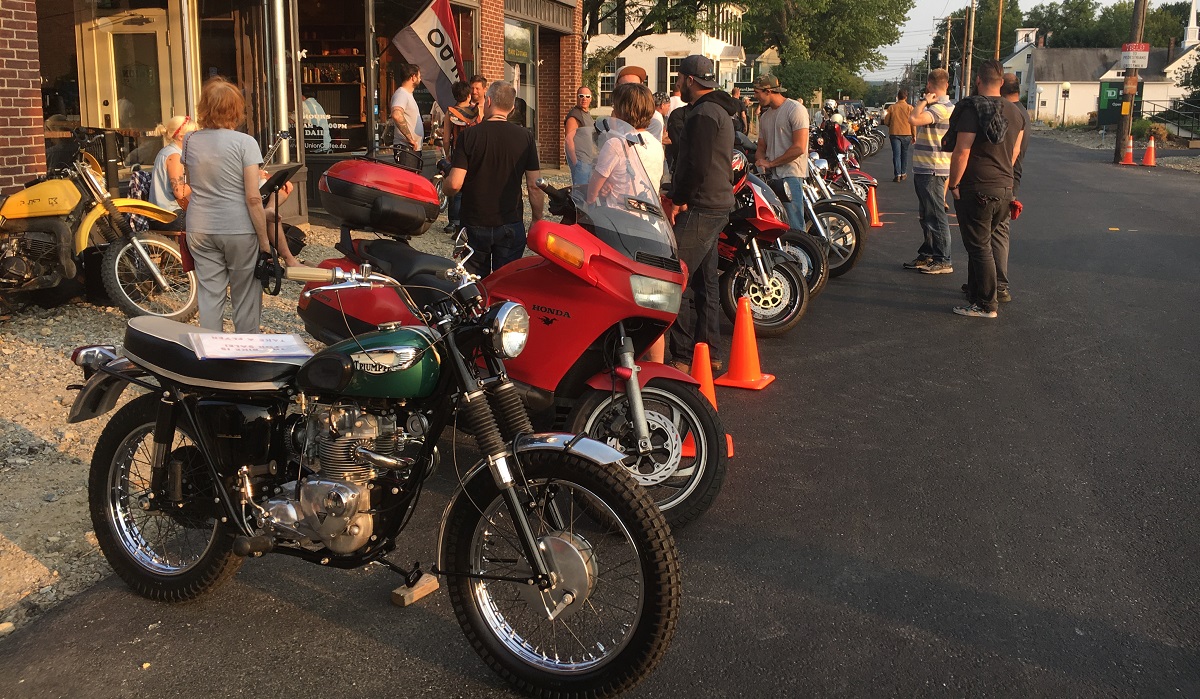 The barriers were breaking down between the two communities, and not just in my own head. More and more, especially over the last few years, I’ve seen the motorcycle community become more inclusive of everybody. It doesn’t matter what you ride – it matters that you ride. The online biker groups I’ve been involved with lately welcome everyone, regardless of bike. The Northeast Vintage Moto Society bike nights welcome everyone, whether your bike is vintage or modern, regardless of make. I’ve seen a few Harleys there, among the Hondas like mine, the classic Triumphs, and a modern Gixxer. It doesn’t matter. And it’s not like I think any less of my old friend Bob because he rides a Harley now instead of the Shadow he learned to ride on.

I’m happy to see both groups coming together. And I’m glad I tried the Street Glide in Florida. I’m actually pondering swapping my PC800 for a cruiser these days, since I don’t do long tours anymore and I’m not one to drag a knee in the curves. Have I become the middle aged man who wants a midlife crisis cruiser to feel young and badass again? I don’t think so. I just want to try something different, and the more relaxed riding style of a cruiser appeals to me as something new to try. Though whatever I choose will probably be Japanese and used, rather than a Harley, to keep the price down, I’ve got nothing against Harleys anymore. I get it.