The headlight on my Honda PC800 is pathetically bad. It’s OK for being visible during the day, but it’s barely more useful than a candle for seeing the road in front of you at night. A previous owner of my bike added a single halogen driving light underneath the headlight. The two of them together improved the lighting to a barely adequate level, and I’ve used it this way for the past three years. But since I’m pondering attempting an Iron Butt SaddleSore 1000, I want better than adequate lighting. Covering 1,000 miles in 24 hours requires riding several hours in the dark even on the longest days of the year, and at highway speeds my improved lighting still didn’t shine far enough ahead for safety. It was time to research alternative options.

My research let me to an LED work light offered by SuperBrightLEDs.com. Though somewhat known for off-road light bars and wacky seizure inducing accent lighting, I’ve purchased LED replacement bulbs for my Subaru BRZ from them before and am quite satisfied with the results. Numerous blogs and forum posts, specifically for my PC800 and otherwise, spoke highly of these lights for motorcycle driving light use. They’re also weatherproof, which is obviously a requirement. So for $34.95 a piece (I saved $5 by ordering red housings to match my bike rather than black or chrome), I ordered two of these lights with a 25° beam angle. They are also available with a 45° beam, but I wanted a narrower beam to shoot the light as far down the road as possible, and to avoid blinding oncoming drivers.

The lights arrived more quickly than expected or promised. I decided to mount them to the front forks in place of the amber reflectors. This would keep the lights down low, as well as enable them to turn with the front wheel, something the stock headlight doesn’t do. The bolts that came with the lights just happened to be the same size and thread pitch to screw in where the reflectors went, but slightly too long, so I bought shorter ones at the hardware store. Physical installation was simple – just bolt on the bracket, then bolt the light on.

You’re on your own for wiring. The lights come with positive and negative pigtails, and that’s it. For testing purposes, I decided to disconnect my halogen driving light and hook the new LED lights to its existing power wiring and switch. Despite there being two lights rather than one, each LED only draws 10 watts, as opposed to 35 from the halogen bulb, cutting my power consumption almost in half. Most bikes, the PC800 included, don’t have much extra electrical capacity, so LEDs are a great option for motorcycle use. Aiming the lights was a little tricky, since I wasn’t able to get a wrench in to loosen or tighten the bolts holding the brackets to the forks with the lights installed, but with some finagling and a couple of failed attempts I got them set the way I wanted.

The difference was literally night… 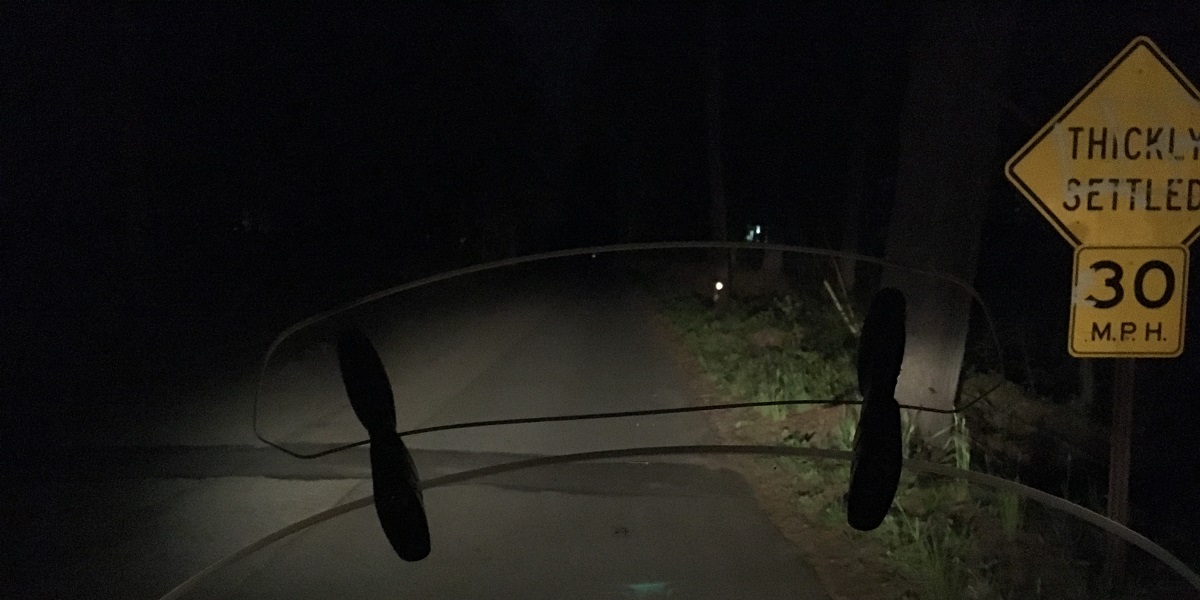 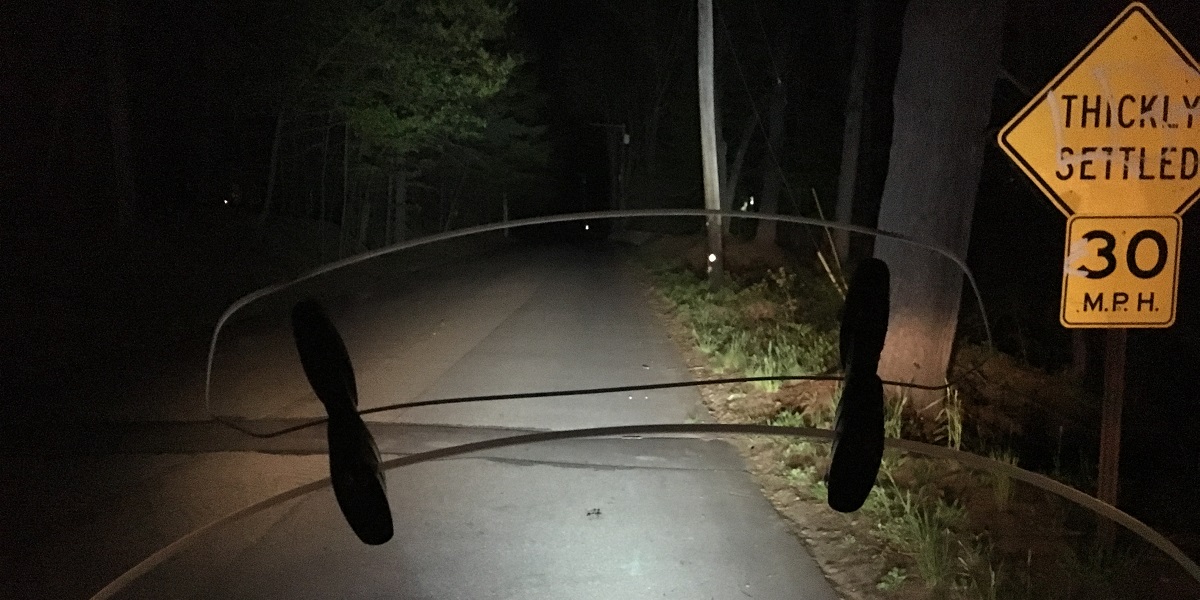 My stock headlight is completely overpowered by the twin LEDs on my forks. I can see much farther down the road, and light up reflectors far beyond those that I used to. If I could turn off my headlight I doubt I’d notice much difference in the overall lighting. The LED driving lights are so effective that I decided to remove the old halogen light and wire them into its old wiring permanently. 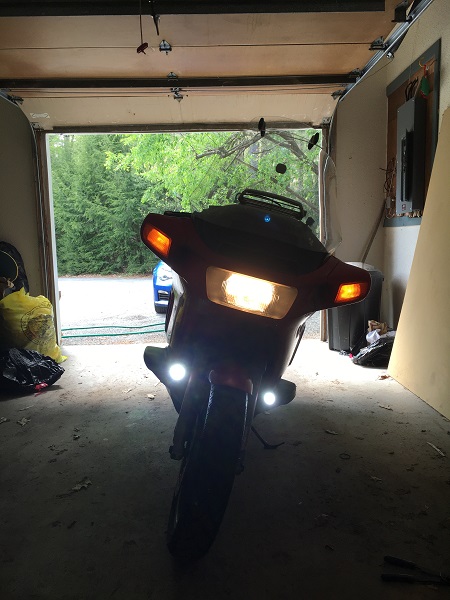 They’re a great help at night, but the driving lights also significantly improve my daytime visibility as well. Moving the lights farther away from my headlight makes them stand out much better than my old halogen driving light, which blended in with the headlight until you got close. Motorcycles are supposed to have an odd number of lights anyway to differentiate them from cars, which have an even number of lights. The running lights are good, but the driving lights really call out to other traffic “I am a motorcycle” rather than “I am a car with a broken headlight.” Anything to help me be seen and avoid getting cut off is a good thing.

It’s worth mentioning that these lights are not DOT approved, and are sold specifically as work lights, not driving lights. If that presents a problem for state inspection, you might want to turn them off or even remove them before you get checked if you’re worried. In my experience, motorcycles generally seem to get away with brighter lights than cars in the interest of safety. Even if they’re not technically street legal, law enforcement tends to turn a blind eye. I rode right through a speedtrap this morning with these lights a-blazing and had no trouble at all. It probably also helps that I took the effort to mount them low and aim them to be visible, but not blinding, to oncoming drivers.

I no longer have any issues hopping on the interstate at night. While you should always be more cautious after dark, I’m no longer afraid of overdriving my lights at or below the speed limit at night. These are just what I needed for a SaddleSore 1000, as well as for general visibility. And for around $70 for a pair ($80 if you splurge for black or chrome), they are well worth the investment. While more expensive motorcycle specific HID driving lights are probably better than these, I can’t think of a more cost effective option for a good pair of driving lights.