After posting my track videos from Tony’s Track Days‘ non-sportbike event, I’ve been overwhelmed by many people asking me the same question: “How did you get that telemetry overlay?” The answer is, there’s an app for that – Harry’s Lap Timer.

I discovered this app by asking the same question myself after seeing some track videos with amazing telemetry. I used to do track days in cars regularly, and picked up the hobby again last year with my Subaru BRZ. I got some decent video with my GoPro, but especially since I’d be sharing my videos on our sister site Right Foot Down, I wanted to do something special. After upgrading to an iPhone 6s (an Android version is also available) with lots of memory, I splurged $27.99 for the Grand Prix Edition of Harry’s Lap Timer.

There are different versions available, for different prices with different features. The Rookie Edition is the most basic version for $8.99. It doesn’t support video, but it does give you access to all of the extensive telemetry features. That includes top speeds, corner speeds, lap times, split times, and all kinds of good stuff. The Petrolhead Edition will run you $19.99 and is where you gain video overlay capabilities. Basically the app simply records video at the same time as telemetry, and later gives you the option to mash the two together to make videos like the ones I made. The Grand Prix Edition is the big kahuna, enabling additional camera overlays. I intended to use my phone in my car for forward facing video, plus a GoPro on the back bumper for a picture-in-picture rear view. You can also overlay a reference lap on top of any lap to compare where you were faster and where you lost time. 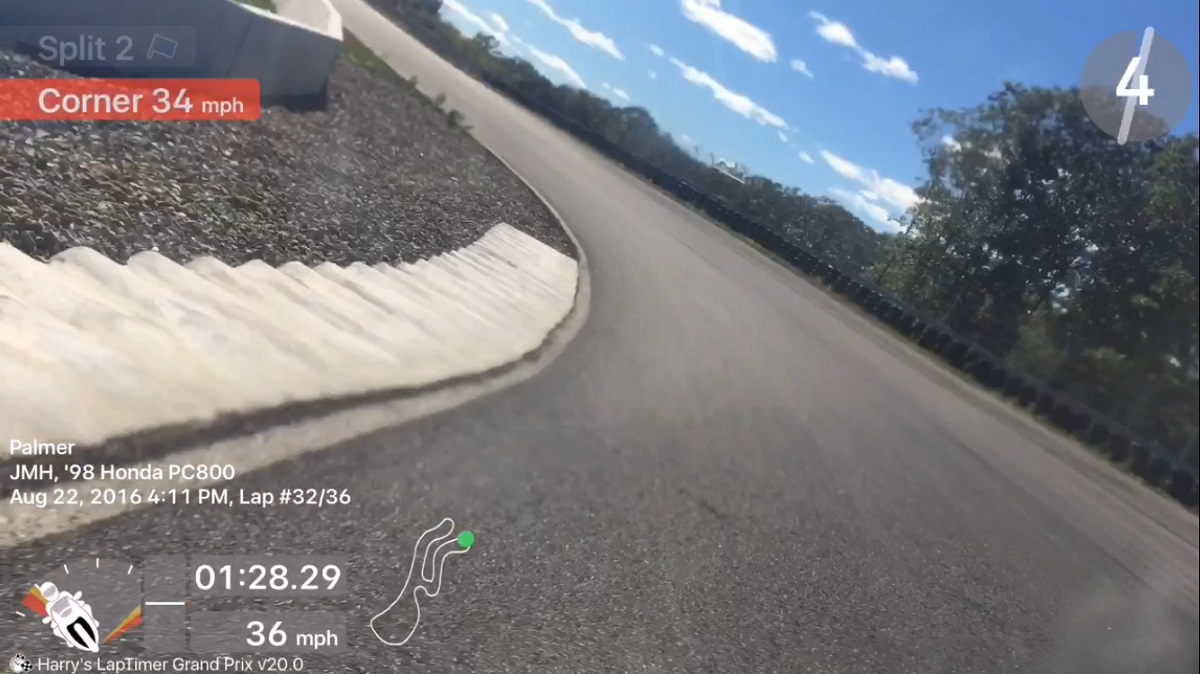 Obviously you’ll need to mount your phone quite securely to your bike, both to satisfy the technical inspectors and so that your precious phone doesn’t go skating down the track at 110mph. I use a Ram Mount X-Grip

for my everyday riding, and it works great for that. I added a zip-tie to keep it shut and keep the phone attached to the bike on the track. I also plugged in external power, since the app drains the battery pretty quickly by using the GPS and camera constantly.

There is a little bit of configuration involved before you hit the track. First, you have to define the user (your name) and your vehicle information. You don’t have to fill out every last detail, but the more information you provide, the more accurate and interesting your telemetry and video will be. Once that’s done, you load the track where you are are running. Unless the track is brand new, there’s already a file containing GPS coordinates for all of the turns, the start/finish line, and other key locations. If you’re on a brand new track that isn’t listed, fear not – you can create it. Once that’s set, you’re ready to “race!” Even if you’re just lapping and not racing. 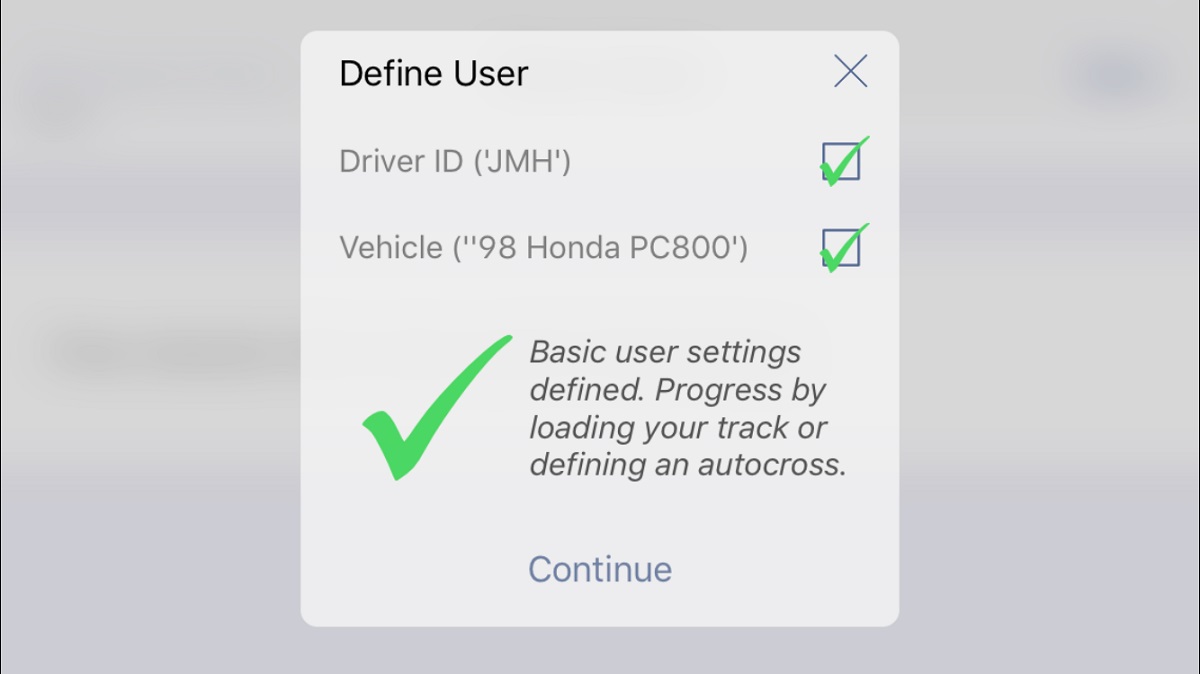 One of my least favorite parts about recording track video is that you generally have to manually start recording before you get on the track so that your attention is on driving/riding rather than fiddling with the camera. This problem is even worse when you’re wearing gloves and recording on your phone, which doesn’t react to the presses of your gloved fingers. You end up with several boring minutes of video showing people standing around the grid doing nothing before finally entering the track. But not with Harry’s Lap Timer! After you configure your session and tell it to “race,” it will go into a standby mode until you cross the start/finish line, then begin recording automatically. Ignore your phone. There’s no need to stab at your phone at triple digit speeds while riding – it’s got this. You will need to manually stop recording at the end of your session, but that’s OK – there’s no rush, and you can just trim the last minute or two off your video like I did.

Within the app, you can watch your video and telemetry overlay as soon as you’re done recording. If you’re racing or time trialing, this can give you immediate feedback as to where you can go a bit faster, or where you’re going a bit too fast and giving up some control. At Tony’s Track Days’ event, I had very little time between my track and classroom sessions, so I just recorded everything for later review. Well, almost everything – I chose not to record my first session, which was slow follow-the-leader laps to familiarize ourselves with the track. And something went wrong with my fourth session that made it not record properly. I’m not sure what, but my fifth and sixth sessions recorded perfectly, so it was probably a one time error. This was also my first time actually using the app at the track, so the error could well have been my own. 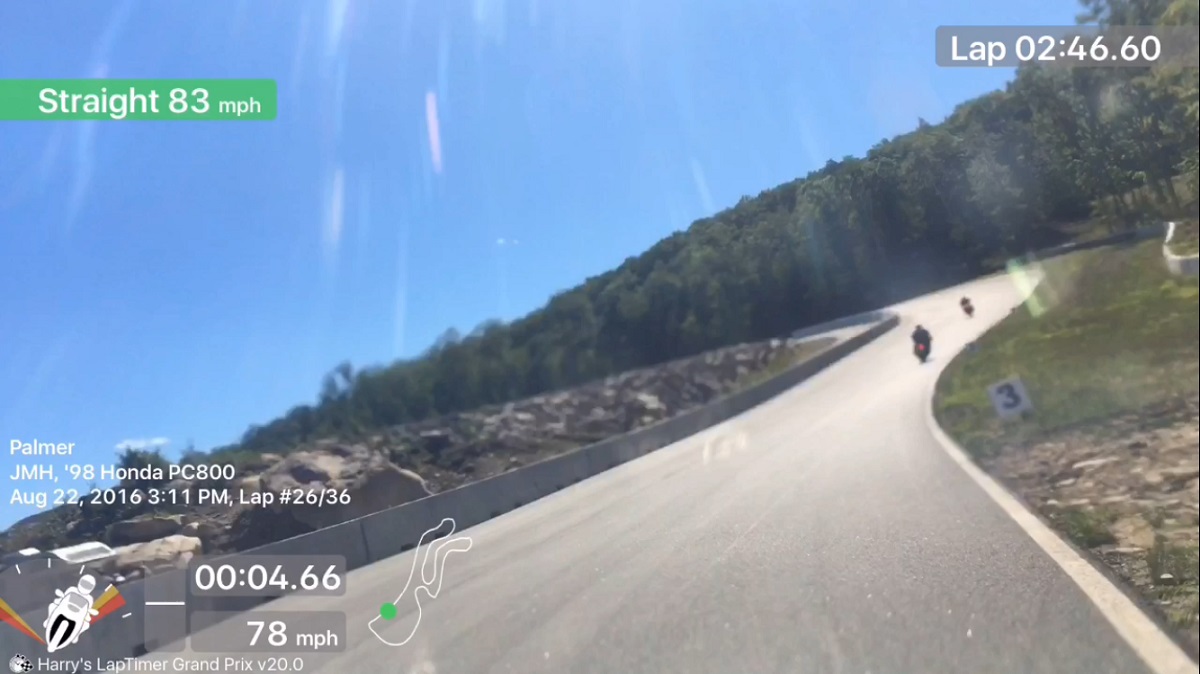 After the event, no doubt you’ll be wanting to show off to your friends – I mean, analyze your telemetry in detail to see where you can improve next time. While you can view the overlay video within the app immediately, to share it with the world you’ll need to render a new video containing it and save it to your phone. My full sessions, roughly 16 minutes of video, are about 3GB each, so you’ll want to make sure you have some decent memory available on your phone before recording or rendering video. Also make sure you have some time on your hands. My 128GB iPhone 6s is no slouch for processing power, but it did take several minutes for each video to render, as well as a big chunk of battery for the large amount of processing power required. Plug in your phone and make sure you won’t need to use it for a little while before starting this process.

The resulting video is then available just like any other video file. I used iMovie to add fades, titles, and crop the end of the video back to where I pit in. Then I had to render the video all over again. You can see how this can eat up a lot of memory after a while. After that, I switched to the YouTube app and uploaded each video from there. You’ll obviously want to be on a WiFi connection for that so you don’t blow through your monthly data allotment in one shot.

These are the first videos I have ever shot, edited, and uploaded entirely from my phone. Normally I download the raw footage to my laptop, edit it in Adobe Premiere Elements, and upload it from there. Basic video editing like this was actually easier to do on my phone. I find that amazing, considering that I actually went to college for video production and writing. My phone can do more than all the equipment in the TV studio could.

If you already have a smartphone with a good camera and a decent amount of memory, you’re 95% of the way there. For the average “track day bro,” I’d recommend the $19.99 Petrolhead Edition, which gives you video telemetry overlays without the more fancy features. But you can get as simple or fancy as you want to with Harry’s Lap Timer.

Best of all, now you, too, can have the entire internet asking you, “How did you get that telemetry overlay?”