It’s the most common excuse for every crash involving a cage and a bike: “I didn’t see the motorcycle.” A simple mistake can lead to deadly consequences, as it did for Michael Damore in Portage, IN last week. We’re usually quick to blame poor drivers, but in this case it was Indiana State Trooper Jathan Rose who made a U-turn right in front of Damore. Despite being an experienced track rider, there was nothing he could do, and he slammed into the passenger door of Rose’s cruiser. He later died from his injuries.

There’s a fair bit of controversy about whether police refused to take witness statements that Rose caused the crash, or whether they’re covering up a fellow trooper’s mistake, or that Rose didn’t even try to help Damore after the crash. You can read both sides of the story and make your own conclusions about the aftermath. I had a good experience with the New Hampshire State Police this past Sunday, but I’ve had some bad law enforcement encounters too, and they’re nothing compared to what others have been through. It could be a cover-up, or witnesses may not have understood or been distraught by what they’d just seen. We really don’t know.

Instead, I want to address the established facts – that Rose pulled a U-turn in a construction zone on I-90 right in front of Damore, causing the crash that led to his death. How could Rose possibly not see Damore? We hold police officers to a higher standard than civilians, and they have more driver training than most people on the road. They drive in and out of construction zones all the time, as well as turn around on busy interstates. Since police are allowed to make such maneuvers while the rest of us are not, they should be expected to take extra care when making them. With all of that training and experience going for him, how could Rose have not seen Damore’s approaching motorcycle?

Jack Baruth wrote about his own experience of being the motorcycle that wasn’t seen, and exactly how and why this occurs. It’s a fascinating article, and one that I recommend all motorcyclists read. To summarize, the human eye isn’t all that great, especially compared to other creatures – hence the term “eagle eyed,” referring to sight far better than human. Our brains work hard to make sense of this data, rather like the computerized image enhancement of blurry photos of distant galaxies. This enhancement isn’t perfect, and in the case of the human brain it’s possible for small and/or fast moving objects to get missed by the constant scanning movement of your eyes. Unfortunately, motorcycles fit this description perfectly.

All road bikes sold in the US since 1981 have their lights wired into the ignition so that both are on at the same time. Most places also have laws requiring motorcycles to always have their lights on to make them more visible on the road. However, a single bright headlight is an even smaller spot in a wide field of vision that can get overlooked. Also, the proliferation of daytime running lights on most cars in the US and all cars in Canada dilute the effect tremendously. Because I’m not exactly young, I remember when seeing a vehicle with lights on during the day was highly unusual, and made it stand out in traffic. But now that everybody’s doing it, bikes tend to blend in. 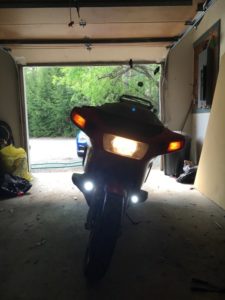 I’ve made an interesting observation since installing my LED driving lights on my PC800. Over my years of riding, I’ve learned to anticipate when a car is about to cut me off or pull out in front of me without noticing I’m there. You know how it is – it’s a survival instinct. But after installing these lights, which I run all the time, people haven’t done this as much. There have been some that I was absolutely certain were going to cut me off, but didn’t. The driving lights are bright, but I think the main reason they make a difference is that they’re mounted a good distance away from the headlight, creating three spots of light rather than one. (There are also the amber running lights, but those aren’t really visible during the day.) They’re also a more bluish white than the yellowish halogen headlight, and the different colors may also play a role in improving my forward visibility, since it’s unusual.

But Damore’s crash was at night, so everyone had their lights on anyway, and Rose should have seen them. Was speed a factor? I’ve seen no information on Damore’s estimated speed, but based on the damage to the cruiser and my own experience with the Ford Crown Victoria Police Interceptor (I used to own a 2003 model), I’d make an educated guess that the damage is consistent with the reduced 45-55mph speed limit I’d expect in a construction zone. The door is wrecked, but the roof and floor are intact, and the bike didn’t land in the trooper’s lap as it would have at ludicrous speed, like this. 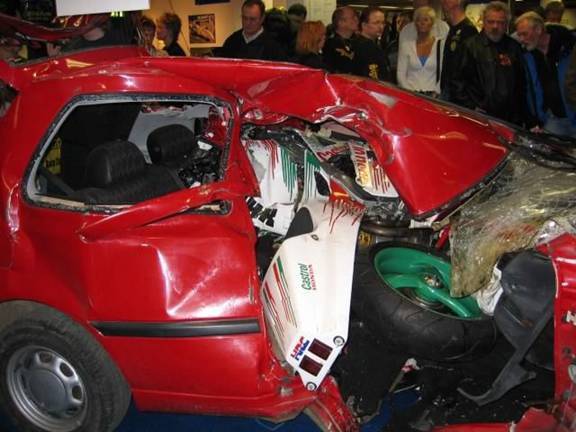 I could be wrong. The post at RideChi, which quotes the Sun-Times article and police statement followed by a rather different witness perspective, does confirm that his license was under suspension, despite disputing the police claim that the bike wasn’t registered. They don’t suspend licenses without a reason, so maybe he was a bit wild on the street. But a suspended license was NOT an excuse that makes this crash OK. It may have been suspended due to unpaid parking tickets or taxes for all we know. And even if it was suspended for numerous traffic violations, it has nothing to do with a trooper pulling out in front of him and causing the crash that killed him.

What can be done about this problem? Motorcycles already have lights. If they got any wider, they’d be a Can-Am Spyder, or an Elio. I already see countless stickers and signs like this one all over the place. Even the worst driver knows that they shouldn’t hit a motorcycle (well, except this one). Yet the most common type of car/bike crash is where an oncoming car makes a left turn across the bike’s path. A single headlight and small size make it difficult for a driver to judge a bike’s speed and distance, if it even registers in the driver’s mind at all. A mind can be trained and retrained, as I would expect Trooper Rose’s to have been. I, and many riders I’ve talked to, notice other motorcycles on the road much more since we started riding them ourselves. But it’s a battle against the way the brain functions, and human error is always possible. Despite a few witness claims to the contrary, I’m sure that Trooper Rose had no malicious intent in making his U-turn when and where he did.

Certainly Michael Damore never expected a car to make a U-turn in front of him on the interstate, either, and rightfully so. But as riders, we should try as best we can to anticipate “the other guy” doing the craziest, stupidest thing they possibly can, so that when, someday, they do, we’re that much more prepared for it. Although Sirius Black rode the flying motorcycle in the Harry Potter stories, it was Mad Eye Moody’s philosophy that is best applied to riding: “Constant vigilance!”