Cool thing about the hospital? All the pillows you can handle. Totally worth it.

You suck at driving. Well, I mean, not you specifically. You are great at driving. And me, I’m also great at driving. But everyone else? Everyone else sucks at driving. This is especially disconcerting for those of us who travel on two wheels, because while automotive safety has been steadily improving for vehicle occupants, it is still quite dangerous to be outside the car that drifts into oncoming traffic while the driver is liking his friend’s swipe-chat, or whatever it is you kids do these days. I mean, not you, but, you know, other people.

I’ve been dodging lunatic four wheelers for 15 years now and managed to not get hit by any of them up until a couple months ago when another driver decided my left leg should have 17 degrees of freedom.

I’m usually the guy telling everyone that motorcycles are not as dangerous as everyone says they are. Two weeks in the hospital make it tough to stand by that, but I still believe it. A huge number of motorcycle wrecks and injuries fall under a small number of causes. If you know what these causes are, and you prepare for them appropriately, your risk goes down significantly, and you can protect your femur from the scourge of shitty Ford Mustang drivers, and from yourself.

Okay, without further delay: the top four things that will kill you:

There are many other ways that motorcycles are dangerous, but these four things account for the majority of motorcycle injuries. Avoid these four things and you are way more likely to make it home safe. Two of these things are suuuuper easy to avoid. Can you guess what they are? If you guessed “Being a drunk rider” and the face thing, you win a prize.

Guess how many motorcycle fatalities involved a rider who had been drinking?

Hey, guess what? Don’t ride drunk and your statistical chance of dying on a motorcycle just went way down. Easiest thing ever.

Second easiest thing ever? Full face helmet. Helmets are estimated to be about 40% effective in preventing fatal injuries for motorcycle riders. The data also shows them to significantly reduce not only head injuries, but also neck injuries, so for those of you that think the helmet will just cause whiplash, the data is not on your side. Also, just for fun, take a look at the windshield of this Mustang. 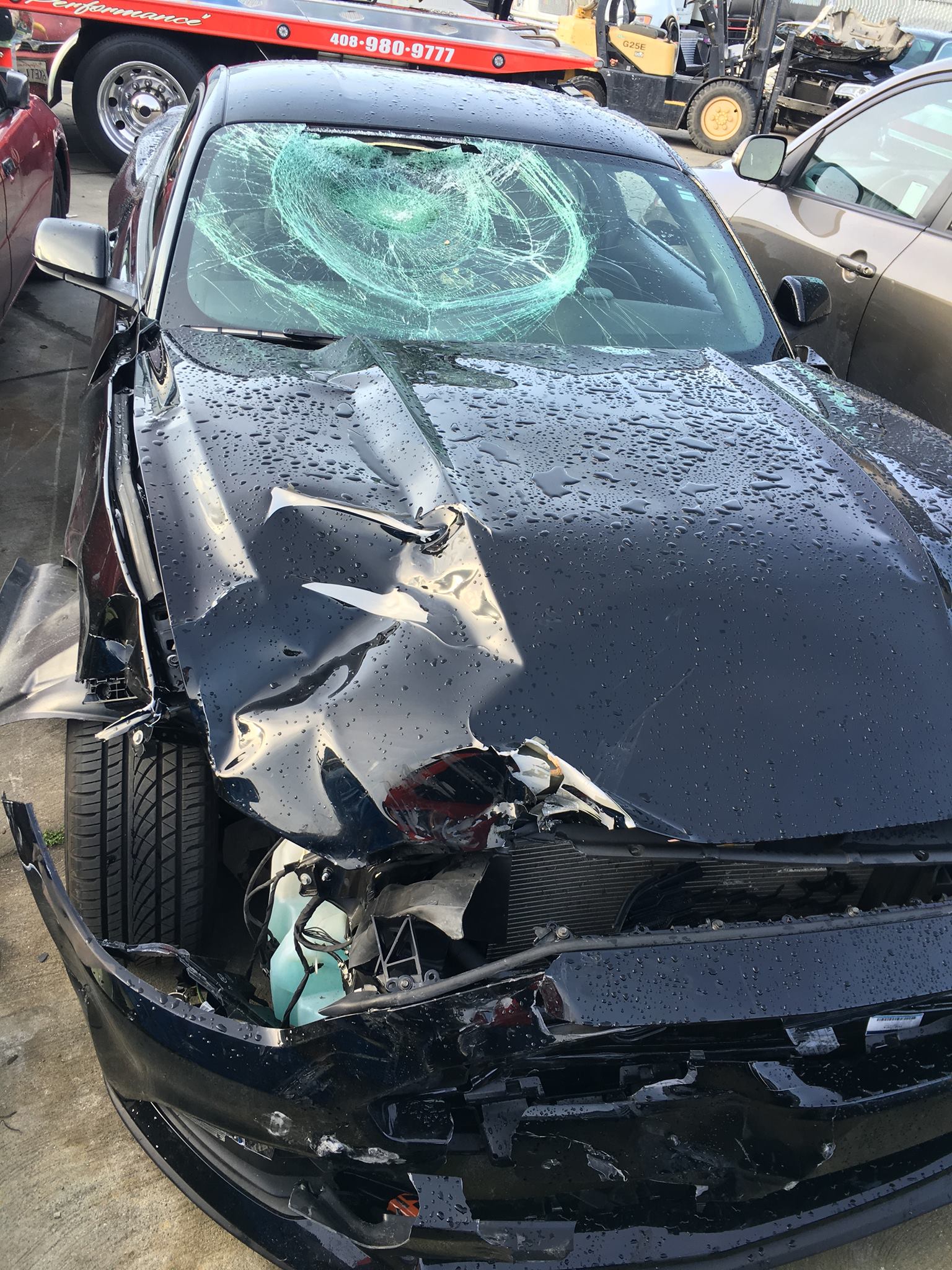 Now take a look at my helmet.

Now back at the Mustang.

Now look at my face. 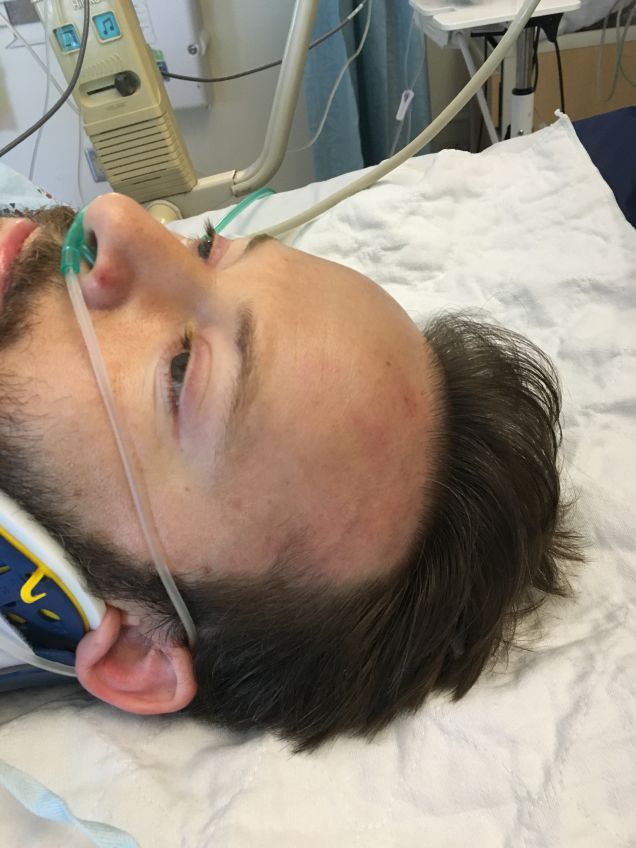 Notice that my face doesn’t look like it got smashed up by a windshield at 40 MPH.

I’m not going to be the All-The-Gear-All-The-Time guy here because this is an article focusing on the really statistically significant things, but I’ll just note that everywhere I wasn’t wearing protective gear has road rash. I only slid for a short distance and my legs and feet had road rash scattered all over. My torso, head, and hands literally don’t have a single scratch because of the helmet, gloves, and jacket. So make your own decision on your other gear, but the data says your helmet is mandatory.

Have you ever gotten in your car and driven somewhere while thinking about something, and you arrive at your destination without any recollection of the drive there? Me too. This is because you and I are wizards.

Not really. It’s because your subconscious knows how to drive because you’ve been doing it for long enough that (as long as everything goes normally) it’s just a reaction. If you haven’t been driving for more than a few years, this doesn’t apply to you, and you are an indiscriminate death missile. Riding a motorcycle has a totally different set of subconscious programming that needs to happen. The cool thing is, you won’t even know what you’re reacting too sometimes. I notice this when my subconscious expects something to happen but then it doesn’t. Something like the driver in the lane next to me will make some slight movement, and before I know it I’m reaching up to grab the brakes because a few times before a different driver has made the same movement and then changed into my lane without looking or using a turn signal because his subconscious has been programed to be an asshole.

You know those big white rectangles at crosswalks? They’re really slippery when wet. I’m not sure why I know that, but my brain figured it out for me at some point and I slow down without even thinking about it. There are a million little dangers like this that you pick up over time, but you just have to ride and experience them to program them in there, and while you’re programing them, you need to be prepared for them with extra space, extra time, and extra traction, because your subconscious doesn’t know about them yet.

Oncoming Cars Making A Left Hand Turn In Front Of You

Okay, final thing. This seems really specific but is the cause of a huge number of motorcycle wrecks and often leads to serious injuries for the motorcyclist because it results in a head-on or near head-on collision. This exact thing has almost happen to me enough times that I always ride with my high beam on during the day, and I recommend you do the same. Just remember to turn it off at night.

Just as a quick bonus, two other things that are significant enough to mention. The first happens to me a lot: cars changing into your lane (or through your “lane” if you’re splitting lanes). Adjust your speed and spacing to be prepared for any of them to do it at any time. And the second not so common, but near to my heart given my current handicapped situation: When your light turns green, make sure the cross traffic is slowing down before you go, because sometimes they will ignore the red and accelerate directly into your foot.

So that’s it. Four things, two super easy, two you just need to keep in mind while riding, that will significantly reduce your chances of being injured on a motorcycle:

Riding is still dangerous. Life is dangerous. But it’s worth it. Yes, I’m getting another bike when I can ride again; probably two. I love motorcycles, and I’ll be out again, a little bit more cautious, and hopefully a little bit safer, looking forward to the day when the roads are filled with self-driving cars.

Also, if you drive a Mustang, you are a terrible driver. You suck at driving.

Seriously, this is not a joke, you are a menace to civil driving, and you should have your license revoked.

Matt Brown is a sometimes writer, occasional engineer, and guy who barely keeps up SuperfastMatt.com.