While checking out Elio’s final prototype at NYIAS, they asked me if I’d heard of Arcimoto. I had not. Later on I stumbled across their display, and was intrigued by what I saw. I understood why Elio had asked me about them – Arcimoto, like Elio, was showing a three-wheeled economy vehicle with tandem seating for two. But they actually turned out to be very different vehicles once I looked under the skin.

That skin, itself, is one of the most notable differences. While the Elio has an enclosed cockpit, the base model of the Arcimoto SRK is open. A roll cage surrounds you, as well as a windshield and a roof, but the sides are more open than a Jeep Wrangler with the doors removed. Body panels are available as an option, but don’t expect anything fancy, with the exception of the “Eagle Wing” door that opens up and over the roof like a simplified Tesla Model X. Each of the tandem seats has not one, but two three-point seat belts. Fastening both essentially straps you into a four point harness. Heated seats and controls are standard equipment, useful for those chilly mornings.

Another major difference is the controls. Both vehicles are legally considered motorcycles, since they have less than four wheels. But while the Elio drives like a car, Arcimoto uses motorcycle controls. The setup was quite familiar to me as a motorcyclist myself, but it employs an entirely different skill set than a traditional car, or the Elio. As a result, the SRK will not qualify for the “autocycle” category that Elio is pushing to allow people to drive their cars without a motorcycle license.

Arcimoto doesn’t seem to be concerned about this, though. They point out that you’re allowed to take your motorcycle license road test on whatever bike you bring, and therefore you’d be allowed to take it on an SRK. This would be the one, and only, instance in which I would NOT recommend taking the MSF Basic RiderCourse to get a motorcycle license, because almost nothing you’d learn about riding a two-wheeler would apply to the Arcimoto. You could also ride this on just a motorcycle learner’s permit as long as you follow its restrictions, which vary by state. While a learner’s permit for a car requires a passenger, a permit for a motorcycle typically prohibits one, so you could certainly teach yourself to ride it without much difficulty. 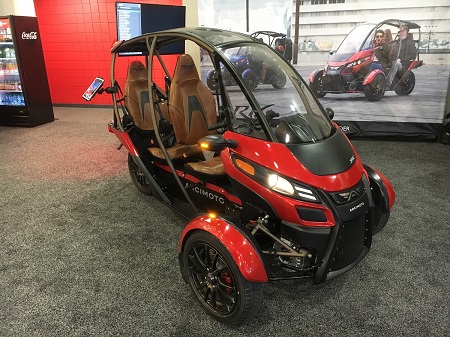 But the biggest difference between the Elio and the Arcimoto is the powertrain. The SRK utilizes two small but strong electric motors, each powering one of the front wheels. You sit on top of the battery, which stretches the length of the vehicle. Like a motorcycle there are two brake controls, but the foot pedal operates the mechanical brakes on all three wheels while the handlebar brake lever controls regenerative braking, which recharges the batteries. Arcimoto claims a range of 70 miles (130 with an extended range package), 0-60 in 7.5 seconds, and a top speed of 80mph. Given the SRK’s weight of a tick over 1,000lbs and the instant-on power delivery of electric motors, I believe these figures. And this is only 60% of the motors’ full potential. Arcimoto turned the power down to keep the SRK from burning up its tires like a front wheel drive Challenger Hellcat. I wonder how long it would be until the aftermarket develops a Tesla-like “insane mode” to unleash the SRK’s full potential, voiding every warranty and all regard for safety in the process.

So really, despite using the same general formula, the Elio and Arcimoto SRK are very different vehicles. In fact, the two companies don’t even consider each other to be competitors. While Elio has built a very small three-wheeled car, Arcimoto has created a Tuk-Tuk for the 21st century. I think this is wonderful, because Tuk-Tuks are awesome, as demonstrated by this video of the greatest Tuk-Tuk chase ever.

Seriously, though, I think the Arcimoto SRK has the potential to be the electric vehicle for the masses. A Tesla it is not, but with a target price of $11,900 before incentives, it’s nearly a third the price of a Nissan Leaf, and a full Leaf less expensive than the eagerly anticipated “poor man’s” Tesla Model 3. I could see the SRK being particularly popular in cities, whose dense traffic gives the electric drivetrain a major advantage in overall efficiency. There’s even a fleet version, the Deliverator, that replaces the back seat with a good sized cargo area, making the SRK a great choice for city deliveries ranging from pizza to legal documents to human blood. Yet it also has the speed and performance to keep up with traffic outside of the city.

There is one more big difference between the Elio and the Arcimoto SRK. I’ve personally seen the SRK in action. While Elio is not yet allowing test drives of their prototype, I watched the SRK maneuver slowly through a roped off area of the Javits Center. While I absolutely believe that the Elio is fully capable of self propulsion as well, seeing is believing, and personally I think seeing the more radical SRK in action was even more impressive than seeing the more traditional Elio go for a drive. (That’s probably the first time the Elio has ever been called “traditional,” but with a gas motor and manual transmission, it is in this case.)

Arcimoto calls their three wheeled car bike thing “The Everyday Electric.” Though I’d need the extended range package for my daily commute, I could see myself taking this to work regularly. Despite being close to twice the price of an Elio, over time it would make up that difference in savings on gas. State and federal electric vehicle tax credits could also go a long way toward paying the premium over an Elio. I look forward to seeing what the future holds for both of these futuristic vehicles.

(To learn more about Arcimoto, check out The Untitled Car Show interview with Arcimoto’s Mark Frohnmayer and Jesse Fittipaldi.)